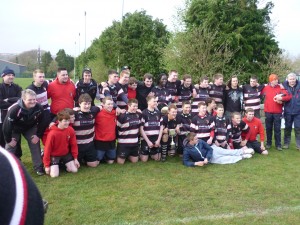 Ballincollig U17s finally got their hands on some silverware on last Sunday with a hard fought victory over their West Cork counterparts Bantry to win the under 17 cup at P.B.C grounds in Wilton. The game was played in very blustery conditions, which dictated the nature of the game in both halves. Bantry played with the aid of a strong breeze in the opening half and the Ballincollig boys were forced to defend their territory for long periods but defend gallantly they did and the only scoring opportunity they gave the opposition was a penalty kick from 30 metres which they failed to convert. Bantry pounded the Ballincollig defence but there was no surrender with gallant tackling from Cameron Lucey, Aaron Mc Namara, James O’Donnell, Jack O’Sullivan ,Dave Mc Coy , Scott Vaughan, Aaron O’Flynn and Shane Quinlan on the wing who gave a masterful display of tackling and defensive skills.

Brian Verling marshalled proceedings from the 9 position and set the seeds for a wounderful display by the tigerish Ballincollig pack who were the masters at scrum, lineout and ruck time. Fionnan Mc Dermott lorded it in the lineout, which set the Ballincollig maul in motion, which yielded a number of penalties. Ballincollig kicked them down the line to ease pressure and gain territory. Bantry to their credit through some slick passing made inroads but could not breach a resolute Ballincollig defence. The half finished scoreless thanks to a Ballincollig side who put their bodies on the line and tackled everything that moved. On the resumption Ballincollig played with the aid of the breeze but a few unforced errors in the 6th minute gave Bantry some momentum and from a ruck on their 22 the Bantry scrum half gathered and sold a few dummies and scored the opening try of the game to leave the score 5 nil to the West cork side. From the kick off Ballincollig gained some territory and kept their opponents defending for their lives inside their 22 and one felt it was only a matter of time before their line would be breached. This happened on the 18th minute in the second half Ballincollig won a lineout and mauled their way towards the Bantry line and Dylan Desmond took the ball on from 5 metres and opened the scoring for Ballincollig with a well deserved try.

The sides were now tied and the next score would prove decisive. It came from Ballincollig pressure on the 22 as they picked and drove Bantry infringed on the 27th minute and a penalty was awarded to Ballincollig. Cameron Lucey stepped forwarded and struck a beauty, which went over with the help of the post a score which decided the outcome of this game Bantry 5pts Ballincollig 8 pts. The Ballincollig forwards of Peter Kelleher, Dylan Desmond, Robert Nyhan, Humphrey O’Mahony, Mickey O’Shea, Robert O’Donoghue, James Nyagaya and Fionnan Mc Dermott pounded the opposition to a standstill such was their ferocity and dominance for the duration of the game. One has to credit Bantry for contributing to a most enjoyable game but hats off to the Ballincollig boys whose fitness and sheer determination were the deciding factors in this great win. 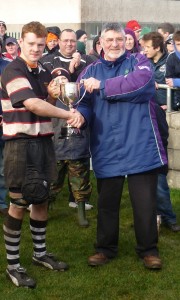