Ballincollig Rugby are hosting a Monster Benefit Night at the Dogs at Curraheen Park Greyhound Stadium in aid of the Club Development Plan. 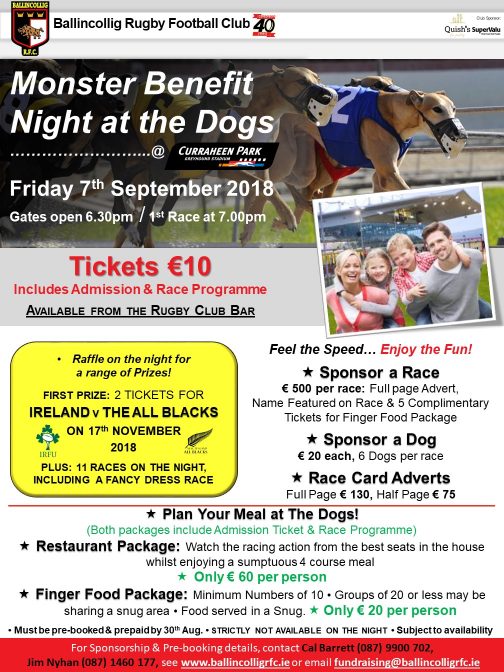 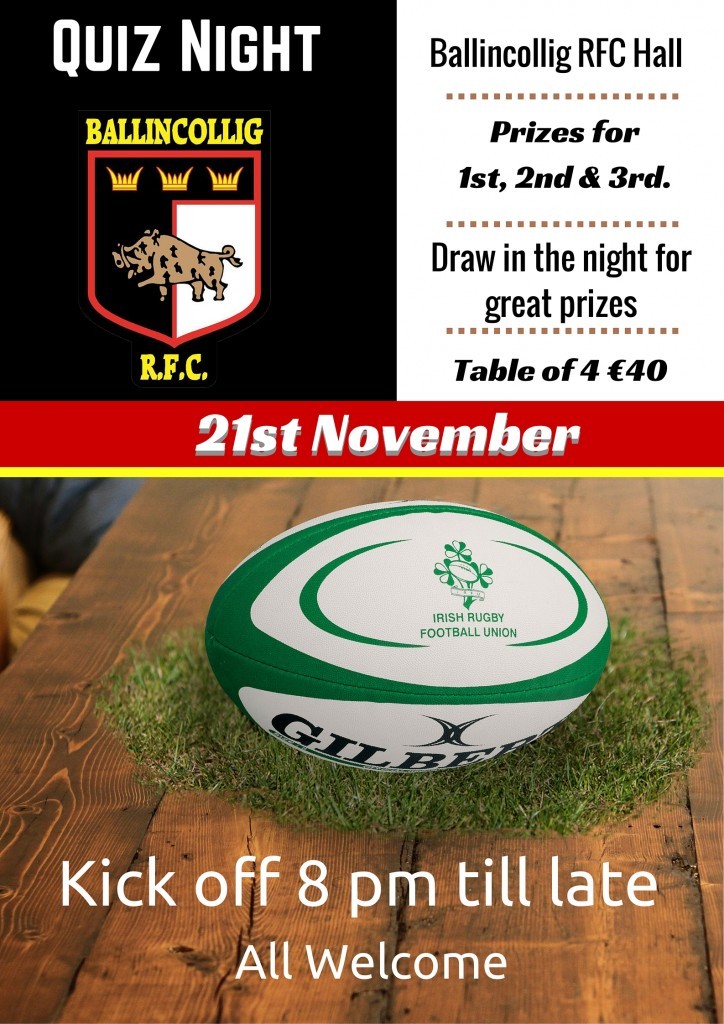 Ireland kick off the Rugby World Cup​ against Canada in the Millennium Stadium on Saturday at 2.30pm.

We will be showing all matches live in HD on the Giant Screen in our newly refurbished clubhouse.

Enjoy the craic with live music and food on every weekend throughout the World Cup. 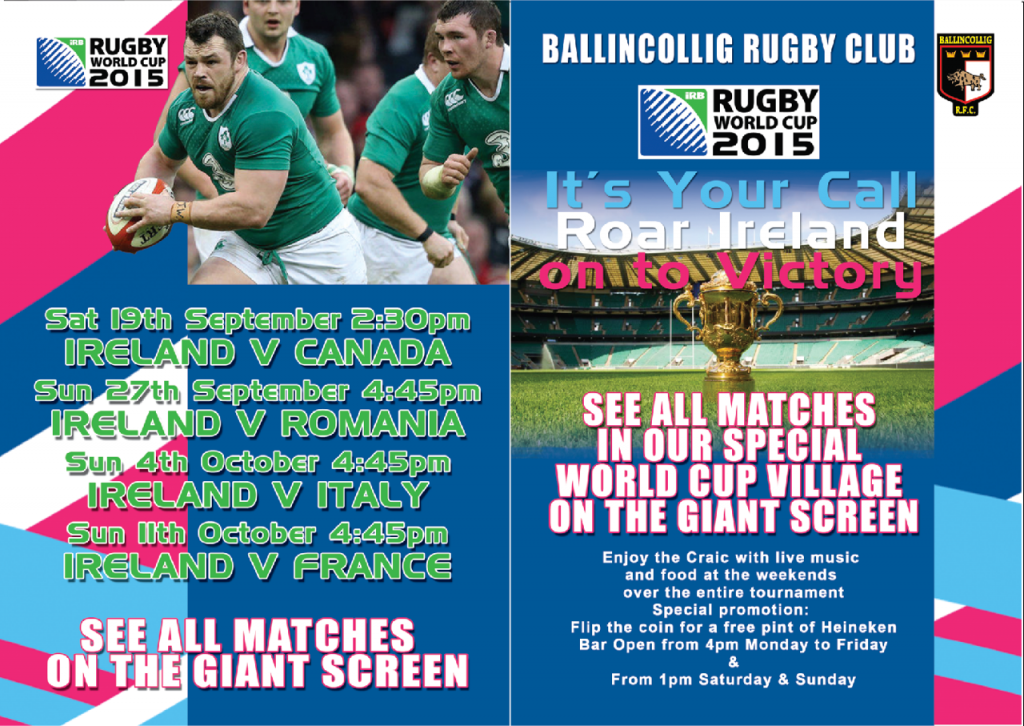 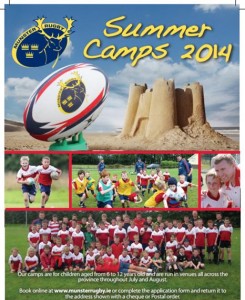 The ever popular Munster Rugby Summer Camp is back for Summer 2014 at Tanner Park.

Camp fee is €85 per child with a family discount of a second and subsequent child at €75.

Camp places are available for boys and girls from 6 years old to 12 years old.

The camp takes place over one week (Monday through to Friday inclusive) between 9:30am and 1:30pm.

If you wish to book online for your preferred venue you will be asked to register with Easy Payments Plus to ensure secure payment. Please click here for more details.

Children who participate in the camps will get the chance to make new friends, learn more about rugby values such as team work, respect and integrity, and also become more aware of the importance of physical fitness. All this while learning to develop the basic rugby skills of passing, tackling (in a controlled environment), evasion and kicking. Most of all we guarantee lots of fun!

To facilitate the appropriate attention, participants will be divided by their age into groups. Central to the Munster Rugby Summer Camps philosophy is ensuring the introduction to the game of Rugby in a safe and controlled manner.

The Camps will be managed and run by fully accredited I.R.F.U. Mini Rugby coaches. All Summer Camp staff have undertaken the National Garda Vetting process required to comply with the IRFU policy regarding recruitment and vetting to work in age grade rugby.

The Club has organized a 53 Seater Bus to bring the 1st XV Ballincollig RFC to the away match again Carrick-on-Suir RFC.

This allows us to bring up to about 25 supporters, willing to travel with the team, with us and save back home again.

Supporters who chose to jump on the team bus are asked to contribute 10,- € towards the cost of the bus.

Fancy Dress is optional, but the best costumes will win spot prizes.

There will also be a raffle with various sot prizes.

Everyone is welcome to join a fun night out. 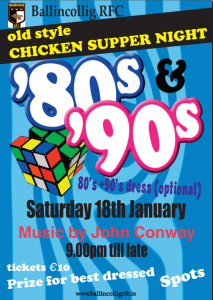 Ballincollig U8s entertained Muskerry on Saturday and a very competitive match kept the large crowd entertained. It was evident that our lads are improving, and with each week their confidence to get on the ball is resulting in the coaches having to work on their ability to share the ball with their own team mates. Well done lads keep up the good work

Perfect rugby playing conditions welcomed Muskerry to Tanner Park. Played in 3 15 minute periods Ballincollig got off to a slow start allowing Muskerry a 2 try lead but scored before the end to narrow the gap to 1. The next period saw great line breaks by Ballincollig but the strong rucking Muskerry pack gave them plenty of possession and out scored Ballincollig again by 2 tries to 1. Ballincollig’s rucking greatly improved in the final period which finished 1 try each. All the team improved as the game went on with special mention for the ferocious tackling of Cathal McDermott and Shane Buckley.

Ballincollig U13s hosted Mallow at Tanner Park on Saturday. In a close game that could have gone either way Mallow edged out the home team on this occasion to win by 10 points to 5. Mallow took the lead with a well worked try and then against the run of play got a second try. Both conversations were missed however and when Ballincollig got a deserved try of their own there was only 5 points in it. Mallow held out however to win the game. Ballincollig will look forward to the next encounter with them.

Ballincollig U18s continued on their winning ways when they hosted Old Christians at Tanner Park on Sat. They began the game with intent and within 10 minutes they registered 17 points the first try within 4 minutes when Shane Quinlan gathered the ball outside the 22 and proved unstoppable as he glided under the posts for the opening score which Cameron Lucey converted. Cameron himself added another try on the 7th minute which he again converted and before the break Mickey O’Shea scored a try after an excellent maul which begun on the 22 when Fionnán Mc Dermott secured the lineout and the pack did the rest. On the resumption more pain was to follow for the visitors as Cameron Lucey proved the thorn in the side when he scored his second try. Ballincollig emptied their bench but were still a potent force and when Peter Kelleher crossed the whitewash the game was over. The Ballincollig Boys showed great pitch awareness and managed the game extremely well and Brian Verling at scrum half gave go forward ball to his forwards and backs alike which the opposition had no answer for. It was a very polished performance and the best of the season so far but Ballincollig’s league game against Bandon away in 2 weeks will provide a much stiffer test as both sides are locked on 6 points. The forwards Peter Kelleher, Dylan Desmond, Peaches Kelleher, Mickey O’Shea, Humphrey O’Mahony, Cian Shanahan, Robert O’Donoghue, Fionnán Mc Dermott, Robert Nyhan, Cian O’Leary, Daire Buckley and Stephen Mc Grath put in a huge shift and the backs Brian Verling, Aaron O’Flynn, Cameron Lucey, Aaron Mc Namara, James O’Donnell, jack O’Sullivan, Shane Quinlan, Cameron Thornton, Colin Casey, Daire Conway had the measure of the opposition all day with some very slick passing and interchanging.   The boys have a well deserved rest on next weekend having already played games so far. Well done lads for a gritty and powerful performance.

U9 – v Highfield Tanner Park kick off 10am

U11 – v Midleton away meeting 9:45am travelling by car 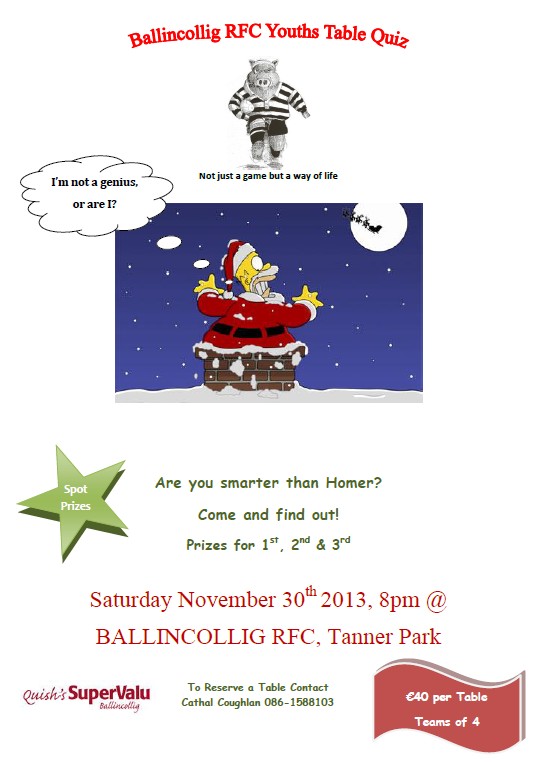