Last Sunday, Oct 5th, our Ballincollig ladies got their AIL Div 2 League campaign off to a winning start with a 34-7 victory at home to a newly formed Dungarvan/Youghal side.It was a tough first 10 mins for both sides as defences were strong but an unlucky Dungarvan/Youghal conceded a penalty an Ballincolligs Lizzy Kelly kicked for goal to get 3 points on the board. This seemed to settled down the Ballincollig girls and they continued their success with Christina Broderick intercepting a pass from Dungarvan/Youghal and she ran in a try.  The conversion from Lizzy Kelly saw the score lie at 10-0.The second half showed great defense from both sides again but it didn’t seem to be Dungarvan/Youghals day as a strong Ballincollig side saw a try from outhalf Lizzy Kelly & 2 more tries from centre Christina Broderick.In the last 15 mins of the game Dungarvan/Youghal showed their pace when they played down the wing and ran in a try & converted. This didn’t stop the Ballincollig ladies as they fought back with yet another try from substitute & newcomer to the team Elsa Giruad, with another great conversion from Lizzy Kelly. This was a great victory for the girls as they registerd themselves a bonus point win.

Next week the girls are away to St Senans, lets hope it’s another success. 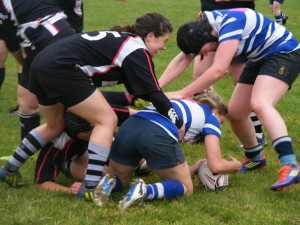