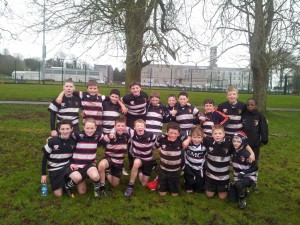 Ballincollig travelled to Muskerry RFC for their annual festival. In extremely bad weather conditions, with driving rain, Muskerry the hosts were first up when the game started Ballincollig were the much superior team and soon racked up a 3-0 lead at halftime. The second half started with another great series of play from Ballincollig, but were punished for straying offside. Form the penalty Ballincollig turned the ball over and after some outstanding rucking another sore was added in favour of Ballincollig leaving the score line 4-0 to Ballincollig!

Ballincollig U12s travelled to Rockwell College to take part in the Pan Munster U12 Festival Day. In what was a brilliantly organised day, Ballincollig started with a super display against Listowel RFC. Next up was Newcastle West, with Ballincollig continuing the excellent work of the first game. The final game was against a very big and physical Waterpark side from Waterford, where again the lads showed the full array of rugby skills.

It was fantastic to see the U12s play their best rugby of the season in Rockwell last Saturday. The teamwork and support play of every player was superb and it was great to see all of the hard work the lads have put in over the season paying off with a brilliant display on the day.

The day finished off with a group photo of all participating teams and a very welcome meal in the Rockwell dining hall for players and coaches. Many thanks to Martin Daly and his staff for hosting and organising a great day.

Bad weather, great rugby. A combination of 8 Youghal and 24 Ballincollig U13s gave a fantastic display of open high scoring rugby in atrocious conditions in Youghal last Saturday. Zak Forde, Mark O’Connor and Conor Coughlan all had the chance to play against each other at outhalf. Killian O’Sullivan, David O’Driscoll, Ciaran Curzon, Liam Kilgrew John O’Connell all competed well in the backline with Cameron Moorcroft, James Moore, Michael Buckley, Nicky Quinlan and Colm Touhy going at it hard in the forwards. A wonderful example of friendly sporting rugby.

U7 v Training Tanner Park 10am

U8 v Training Tanner Park 10am

U9 v Training Tanner Park 10am

U10 v Training Tanner Park 10am

U11 v Training Tanner Park 10am

U12 v Training Tanner Park 10am

U17 v Youghal league semi-final away kick off TBC