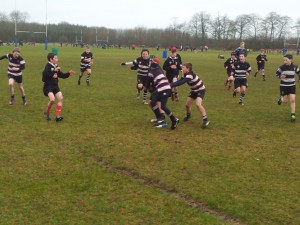 Ballincollig U13s made the long journey to North Cork to play Charleville on Saturday for their first game of 2014. It turned out to be a game of 2 halves. Ballincollig came out of the blocks stronger and after an impressive 20 minutes were deservedly 19 points up and looked the more controlled team. Charleville were consistently in their own 22 and the only answer they had during the early stages of the game was to kick to ball out back to Ballincollig. However, this tactic suddenly created an opportunity for the home team when they were able to capitalise on some poor ball control by Ballincollig and get their first try against the run of play. The first half ending 19pts to 5pts in favour of Ballincollig after Charleville missed their conversion. The try spurred on Charleville and the second half was a different game. Ballincollig lost their shape and concentration and allowed Charleville to get back into the match. Charleville scored another try soon in to the second half which pulled the score back to single converted try. Ballincollig were now the team stuck in their 22.

On occasions Ballincollig played the great rugby we know they can play including a great 25 yard maul from their own try line. But this was not maintained and Ballincollig continued to make silly mistakes. Soon the game was level when Charleville were awarded a penalty try after Ballincollig were again caught in the back and a Charleville player illegally pushed off the ball when a try was clear. This tied the game and then to add salt to the wound, in the last 2 minutes Charleville scored the last try of the game to win the match by spreading the ball out wide when Ballincollig got sucked in to the centre to be fair however and not taking anything away from Charleville’s fine come back, this was really a game lost by Balllincollig rather than won by Charleville. The disappointment by the Ballincollig lads was clear on their faces but no doubt the lads will have learnt a valuable lesson in North Cork and will bounce back next time.

Ballincollig U14s moved a step closer to qualifying for the knockout stages by beating a very good Clonakilty team 14 – 7 in a very competitive and sporting game in Tanner Park Saturday. James Moore, Mikey Fitton and Ciaran O’Driscoll worked very hard in the front row. Conor O’Buchalla, Reece O’Donighue worked hard in the forwards with Sam Kiely, Phil Minihane, and Padraig Sweeney working hard in the backs. Tries by Jack Casey and James Peterson both converted be the reliable Zak Forde. We travel to Bandon on Saturday 25th for a winner take all game. All support would be greatly appreciated