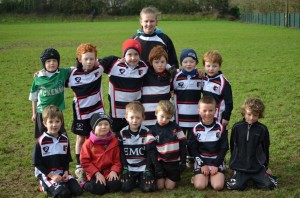 Good luck to Ballincollig U7s who play their first match against Douglas this weekend!

Ballincollig U13s travelled to Mallow on Saturday for an early kick off at 10.30. Both teams had met back in October in Tanner Park and in that close game Mallow came out the winner. Ballincollig have continued to improve every week and this was evident in the way that the lads communicated to each other, knew the importance of field positions and not to panic when under pressure. With the aid of slight slope in the first half Ballincollig got 2 tries under the post plus the conversions. Mallow were a good physical team and pulled back a try of their own in the corner after a 5 yard scrum but the conversion was a hard one and missed. Ballincollig kept the pressure on towards the end of the first half and their efforts were awarded with a great drive down the centre which opened up the Mallow defence. Excellent support play by Ballincollig meant they recycled the ball from the resulting ruck and scored their 3rd try. The second half started with Mallow putting on the pressure. Mallow are a good team with big forwards driving the pack well. All this pressure resulted with a try for Mallow when the Ballincollig backs got sucked into the centre allowing Mallow to bring the ball out wide and score a try. Some quiet words by the coaches reminding the Ballincollig lads not to get out of position was taken on board by the lads and soon they were once again showing great skill and support play. The lads were talking to each other and the heads did not drop. A lot of pressure in the corner ended with a try for Ballincollig with 10minutes to go and this had the effect of boosting the Ballincollig player’s confidence while Mallow appeared to lose a bit of theirs after all their hard work at the start of the second half. Ballincollig finished the stronger with another great try towards the end of the game after a lovely movement from one end of the pitch to the other wing and nice support play. With only a few weeks left in this season the lads have certainly come up a gear or two in their general play and skill levels but what is most rewarding to see is the way that the team is bonding and that everyone in the team is a valued team mate.

Ballincollig U14s put up a performance that made all the coaches and supporters very proud last Saturday but were outscored by a very big Mallow team. We dominated the opening stages but Mallow scored first with an unconverted try which was quickly answered by great play from Kieran O’Driscoll, Mikey Fitton, Reece O’Donoghue and Conor O’Buchalla which resulted in a try by Liam Fahy and converted by Jamie Holland to give us the lead. Mallow scored just before the break and again just after the restart which made it very difficult for our boys but we struck back with a great forwards try again converted by Jamie to bring the scores closer. Good performances by Ali Crowley, Eoin O’Neill, Daniel Smith, Zak Forde, Sam Kiely and James Moore made it difficult for Mallow right to the end

Following the successful trip to Wales the weekend before, it was back to domestic rugby for the U18 squad. The first Cup match of the season vs Dunmanway at home in Tanner Park. The game got off to a lively start with both Teams measuring each other up with forward and back moves testing the defences. Out half Cameron Lucey was first on the point’s board with a penalty in the 15th minute. 5 minutes later a huge Team effort attacking the Dunmanway line put Captain Peter Kelleher over in the corner for a try. It was defend ,defend, defend next as Dunmanway launched several runs with the Ballincollig line as the target. Try stopping tackles went in from all directions, Robert Donoghue, Fionann MacDermott and Shane Quinlan defending the lines well. No further scores saw it 8 – 0 in favour of the Home side at the half time break. In the second half both Teams spared nothing and launched some great runs in the backlines, marshalled well by Brian Verling at scrum half. The back line defence of Scott Vaughan at winger, Colin Casey at 13 and Dave McCoy ensured that the Dunmanway assault was kept at bay. Cian Shanahan came to the rescue when Dunmanway broke the line and looked like they were in for a score. No joy. A line burst from the backs with some great handling skills put Aaron McNamara in for a try in the 55th minute. Cameron Lucey converted to make it 15 – 0. As usual dominance in the Ballincollig lineout gave a great platform to attack, with great performances from James Kelleher, Daire Buckley and Humphrey O’ Mahony. Phase after phase of play put the ball through all hands on the Team and it was Mikey O’Shea that got over the line in the 69th minute to give Ballincollig a comfortable lead in the game. This was mission accomplished for Ballincollig with a score line of 20 – 0 at full time. Roll on the next round which should be at home in Tanner Park next week. A great game of Rugby ahead.

U7 – Douglas Tanner Park kick off 10am

U9 – Douglas Tanner Park kick off 10am

U13 – Cork Constitution home kick off 10am