Ballincollig RFC continued their progress in the U17 cup with a comprehensive victory over Mitchelstown at Tanner Park on last Saturday 30th March 2013. The visitors opened the scoring with a penalty after 5 minutes but after that it was the home side who showed more urgency and on the 7th minute Robert O’Donoghue drove over the line to put Ballincollig in front and on the 12th minute Shane Quinlan gathered a ball from inside his own half and dissected the visitors defence with pace and strength and as he was ankle tapped just before the line Cameron Lucey was on hand to take the pop pass and dive over under the posts which he also converted. Ballincollig were now in the ascendency and with their pack totally dominating proceedings it was only a matter of time before Peter Kelleher added another try which was also converted. Mitchelstown added a try just before half time to leave the half time score Ballincollig leading 19 to 8. On the resumption Ballincollig’s supremacy continued and when awarded a penalty the quick thinking James Nyagaya took a quick tap and dived over for his sides 4th try. The home side were now rampant and both Cameron Lucey and Peter Kelleher who had already scored added further tries each and the game was well and truly won at this stage. They conceded 2 tries to the visitors in the last few minutes but the game was over as a contest. The Ballincollig boys are now in action again next Saturday 7th with a cup semi final awaiting them at Rathcooney V Old Christians. Good luck with that boys.

U12 South Munster Festival away Ballyanly, Muskerry 10:00 am

U17 v Old Christians away Cup kick off TBC

Don’t forget the cloths collection on Saturday 6th April from 10am to 2pm in Tanner Park. 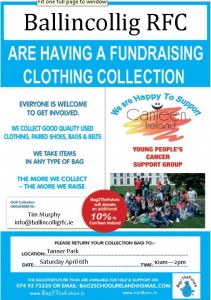