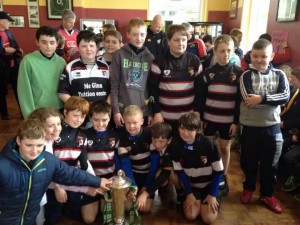 The U12s travelled by bus in the company of the Muskerry U12s for the annual Pan Munster Tournament in Rockwell College v With 16 teams from right across Munster and further afield attending it was a great opportunity to gauge our standards and see how we would square up to new opposition. The panel of 15 players along with supporters arrived early to sunshine and set about warming up. We were placed in a group of 4 with Abbeyfeale, UL Bohs and Kilfeacle. Games were 10 aside and 10 minutes a half. The first match V Abbeyfeale was disappointing with little to show and only a score in the final minute keeping away a blank score-line for Ballincollig. Abbeyfeale were stronger in every area – rucking, lineout, restarts, running, our tackling was non-existent and they eventually outscored us by 6 scores to 1. Hard words were spoken after the game as we know this group are capable of far better but they had let themselves down on this occasion. The good news was that at least they had the opportunity to turn it around quickly in the next game against UL Bohs. This they did and a far hungrier Ballincollig tore into UL Bohs and gave a totally opposite performance to that given in the previous match. Everything they didn’t do in that game they did now and it is impossible to name any individuals as they whole panel bought into what was expected of them and played brilliantly. We eventually won 6 – 2 and looked forward to the final game against Kilfeacle.

This game was a much tighter affair between 2 evenly matched teams and Ballincollig again showing their determination to just edge out winners by 4-3. Special thanks to the pack as they were limited in numbers and some guys had to play every minute of the games which can only stand to them in the future. Variety of injuries were picked up during the day but we should see everyone back in action in time for Tralee.

A big thank you to our hosts, Rockwell College, who ran a special and well organised event, laid on a mini banquet afterwards and had a surprise guest, the 6 Nations Trophy, for everyone to hold and have a picture taken with. This is a great way for U 12s to finish their year and kick on to U13s next year when their game changes to 15-side and full pitch. Thanks to all Ballincollig players, coaches and supporters and special mention to Marie for the “ambulance” service back to Cork.

U7 – Muskerry blitz away meeting 9.15 travel by car

U8 – Muskerry blitz away meeting 9.15 travel by car

U9 – Muskerry blitz away meeting 9.15 travel by car 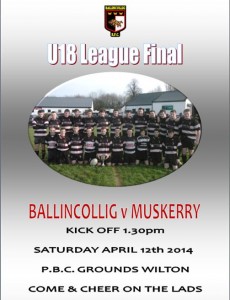 Why not come and support the U18s and cheer on the lads!