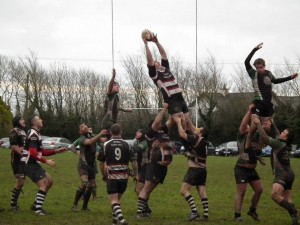 Ballincollig played in difficult conditions with a lot of strong wind and some rain.  We started well and with some good interchanges between the backs and forwards Dave Power went over for a try under the posts which was converted by Denis Galvin

Towards the end of the first half the forwards again dominated the play and Cal Barrett went over for an excellent try again converted by Denis Galvin.

Ballincollig were leading 14pts to nil at half time.

Ballincollig started the second half as they had finished the first – in command of all phases.They were rewarded with a try under the posts from Glen Murphy which was converted by Kevin Ryan.

Ballincollig took their eye off the ball for a short while and Douglas got in for a converted try.

There were good performances from Denis Casey, Ian O’Malley, Fergal Considine and Glen Murphy in the forwards and Dave Power and Mick Goggin in the backs.

Ballincollig now concentrate on the league with an away game against Kilrush next Sunday.