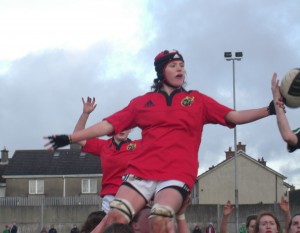 The I.R.F.U organised an Interprovincial competition for Under 19 girls. Munster, Leinster and Connacht lined out at Limerick Institute of Technology (Ulster have no girls under 19 team). Munster were captained by Ballincollig’s Roisin Ormond who is one of the stand out players this season for the Ballincollig ladies team.

Munster played Connacht in their first game and won 28 points to 0. Next up were Leinster who proved to be a tougher outfit but in the end Munster ground them down and leading by example was their captain Roisin Ormond. Munster were pushing hard for a score but knocked the ball on just outside the Leinster 22 after some great play by the Munster players. After three scrums the referee lost his patience with the Leinster forwards and awarded Munster a penalty which was taken quickly and was taken on by a pod of three Munster forwards. Ball presentation was perfect for Ballincollig’s Roisin Ormond to pick the ball form the base of the ruck and drive for the line. Three Leinster players tried but failed to stop Roisin from crossing the line in the corner for a superb try which was the catalyst for Munster to kick on and win by 24 points to 0. A fantastic honour for Roisin who not only earned a call up to the team but also had the honour of captaining the side to victory in the competition.

Munster take on Connacht next Saturday – venue and time TBC.

Well done Roisin from all Ballincollig players, members and supporters. We are sure there is lots more to come from this bright young star.