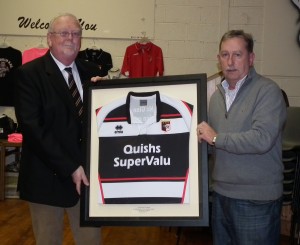 The senior team were to play Corca Duibhne RFC in the league at Tanner Park. Unfortunately the opponents were unable to field a team and Ballincollig RFC were awarded the points.  This puts us in 4th place in the league with one game in hand.

However the day was not spoilt for the club as we had arranged a reception for our sponsors and members. It was encouraging to see some old friends on the day.

The President Tim Murphy welcomed everyone and thanked them for their support which was greatly appreciated.  Tim also presented Sean Quish with a framed club jersey in recognition of his ongoing sponsorship and support of the club.

A draw was held for the sponsors and the winners were:

Congratulations also to Jimmy Hennebry on winning a 2 ticket all expenses paid trip to Rome in the IRFU Your Club Your Country draw.