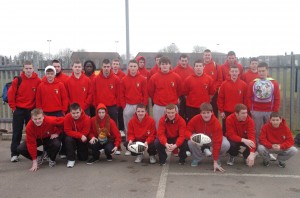 Last Saturday the U12s welcomed a very strong and competetive Cork Con team to Tanner Park. For the second week in a row Ballincollig played superb rubgy and moved into a commanding lead early in the game. Great teamwork combined with some excellent individual skills resulted in Ballincollig scoring a number of fabulous tries. Ballincollig eased up a little in the second half to allow Cork Con score a couple of tries and get back into the game. However, a renewed emphasis on hard work and teamwork resulted in Ballincollig scoring two more tries to run out comfortable winners in the end.

Well done lads on a super display! Keep up the hard work.

Douglas got off to a flying start scoring 3 unconverted tries against our U-13s. Ballincollig showed great courage, team spirit and commitment and fought their way back into the game with tries from Jack Casey and Zak Forde and a conversion by Zak. Michael Buckley, Nicky Quinlan and Liam Mc Geough did great work in the forwards and Philip Minihane and Liam Kilgrew played well in the backs. A try by John O Connell converted by Cian Bradley was not enough to take the game from a very good Douglas side. Training Wed evening 6:30 on the pitch

Ballincollig were leading 10 points to 7 points before the match was stopped 10 mins before time as a precaution due to an injury which has turned out not to be serious. Both teams were fairly well matched with the try count 2 tries to one. This was a competitive and entertaining game with some great rugby played by both teams. Highfield were stronger in the lineouts and both backlines showed good attacking and defensive skills. In the first half the Ballincollig scrum was under pressure but tightened up in the second half and was a lot more solid. The Ballincollig backs played well as individuals but they need to start playing as a unit and this also applies to the backrow. Both number 8’s were the stand out performers on the day. Over all this was a solid performance but plenty of work to be done on the training pitch. Well done Lads

Ballincollig Under 17s continued their league campaign with a home game against Youghal at Tanner Park. Ballincollig started the game with great intensity and pace and for their efforts were rewarded after 6 minutes when they won a line out on the Youghal 22. They mauled their counterparts back and Dylan Desmond dived over to open the scoring having just been denied a try a minute earlier. Ballincollig grew with confidence where their pack were totally dominant against a much bigger Youghal forwards at both scrum and line out time where Brian Verling at scrum half marshalled the maul and Fionnan Mc Dermott and Robert O’Donoghue lorded it at the lineout. Just before the half, Michael O’Shea scored his side’s second try again after some great work by his pack and he dived over the line again from a dominant maul. The half finished 10 nil to the home side where a bigger score to the home side would have been much more appropriate such was their superiority. The second half started in similar fashion and it was more of the same when Humphrey O’Mahony turned over a ball on the 22 nothing could stop him as he touched down for Ballincollig’s third try which was converted by Cameron Lucey. Youghal to their credit fought hard to the very end but could not breach the Ballincollig line due to their resolute dogged defence. It was an overall good team performance, which the boys can be proud of with no doubt more testing games to come. The pack were well served by Peter Kelleher, Dylan Desmond, Robert Nyhan, Humphrey O’Mahony, Michael O’Shea, Fionnan Mc Dermott, Robert O’Donoghue, James Nyagaya, Dave O’Brien, Daire Buckley Stephen Mc Grath, Cian O’Leary and the backs defended brilliantly hence did not concede a score and they were well organised by Brian Verling, Cameron Lucey James O’Donnell Cian Shanahan, Jack O’Sullivan, Aaron O’Flynn, Dave Mc Coy, and Cameron Thornton. Next week end Ballincollig are away to Fermoy RFC. Keep it up boys.

U/17 v Fermoy away kick off TBC