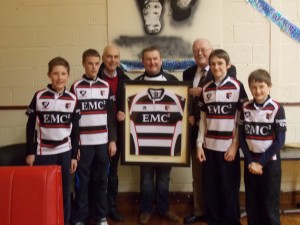 Tim Murphy, President Ballincollig RFC made a presentation of a framed club jersey to John Shaughnessy, EMC in recognition of the company’s ongoing support of the underage rugby section at Ballincollig RFC.  Also included in the photo are Tony Devaney, EMC and members of various underage teams.

A stellar performance from Ballincollig saw them narrowly beaten by a questionable try in the last few minutes of the game.  Forde got a try under the posts in the first half which he converted. A very strong pack put Old Christains under pressure for the whole game and with some great breaks from the backs.  Ballincollig were held short of the line on 3 further occasions.  Old Christians scored a try but failed to convert. We kept them under pressure for the whole match and every player deserves man of the match.  They scored a late try to steal the game 10-7.  Well done everyone.

ALL MINI MATCHES VS. TRALEE RFC HAVE BEEN CANCELLED THIS WEEKEND AND WILL BE RESCHEDULED.

Under 13 League Muskerry away kick off TBC

Under 15 v Clonakilty away league kick off TBC

Under 19 Training venue and time TBC 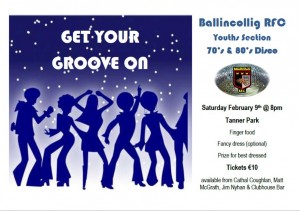 Tickets €10 – finger food/prize for best fancy dress and various spots on the night.

All welcome (Adults Only)