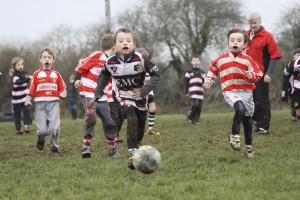 Ballincollig U8s in action against Skibereen

The U8s produced a superb performance in their victory over Skibbereen. Working really well as a unit they ran in six tries against the West Cork side. A hatrick from Pete Kelly, a brace from Sean O’ Neill and a further try from Steven Naughton showed just how much the lads have improved since playing Skibbereen earlier in the season.

9s Shakers had a game in Skibbereen also. Tries were scored by Dean Carey and Rory Kiely with great support from David Fahey, Daniel Keating, Diarmuid Ward, Evan Mc Ardle, Connor Morey and Sean Mischke. These were two great team efforts. Keep it up lads and see you all at training next Saturday.

Ballincoliig U11s traveled to Skibbereen and played a game in three periods of 15minutes each and the [playing standard improved with each period. Neither team deserved to lose and thats how it finished with a draw. Well done lads keep up the good work

Ballincollig U12s travelled to play a big physical Skibereen team.  Ballincollig started the game slowly and conceded a couple of early tries.  Ballincollig then realised that the bigger they are the harder they fall and with a much improved tackling and rucking performance in the second half worked their way back into the game.  Ballincollig finished the game strongly with some very well worked tries and can be proud of their effort on the day.

Ballincollig got off to the perfect start when an attack which involved most of our players resulted in a try by Jack Casey. Dunmanway responded with an equally determined attack 5 minutes later with the same result. When another Ballincolligs attack was stopped on the line Colm Touhy was there in support to barge his way over to put Ballincollig in the lead again. Showing great determination Dunmanway again equalised. Just before halftime Jack Casey ran in another great try converted by Zack Forde. After the restart Dunmanway closed the gap with a fine try and would have scored another except for a very brave tackle by Liam Kilgrew. The forwards fought hard and were rewarded with a try by Tiernan Quinn and soon after Jack got his hatrick which was converted by Zack. Good performances by everyone especially Daniel Smith, Padraig Sweeney and Sam Kiely.

Ballincollig U15s were beaten in their cup match away to Dolphin last Saturday. After giving away 2 soft tries in the first half Ballincollig competed well in the forwards and the backs in a competitive and entertaining game with some great rugby. Ballincollig showed some great ball skills and some great defence but Dolphin were physically stronger in the forwards and ended up winning the game 4 tries to one. This year has been a good year with a top 4 finish in the league and gives us a good platform to work from for next season as the majority of this team will play under 15 again next year. Well done Lads

Ballincollig U17s opened their cup campaign with a home win against Dunmanway who they have met on two occasions already this season and have come out second best on both. The west cork side showed greatest urgency for the first 20 minutes and were rewarded with a well taken try in the corner after the home side conceded a penalty and a quick tap resulted in the first score of the game for Dunmanway. Ballincollig after winning a line out on the Dunmanway 22 they mauled forwarded and a few slick passes saw Dave Mc Coy score a try for Ballincollig and 5 minutes later Aaron O ‘Flynn took a quick tap from a penalty and scored a try in the corner which he also converted to leave the half time score 12 pts to 5 to the home side. On the resumption the Ballincollig continued their dominance and were rewarded with a try by James Nyagaya which was converted and a few minutes later James O’Donnell scored when he intercepted from a line out and crossed the whitewash under the posts. The home side were now rampant and after great mauling Daire Buckley touched down for another try. Dunmanway scored a try in the final minute of the game to leave the final score 34 pts to 10 in favour of the Ballincollig. Confidence is now high as the quest for silverware continues in both league and cup competitions.