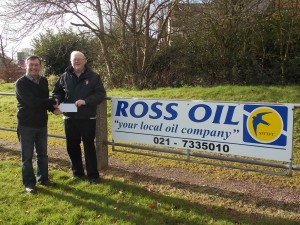 Last Saturday the U/9s had a busy morning with games v Clonakilty and Kinsale. After a slow start we managed to pick up the tempo and tries were scored by D Fahey and Cahal O Donoghue and Tighernach O Leary. We had good games from Dean Carey, Diarmuid Ward, Mathew Hopkins, Daniel Keatng, Connor Brennan Zach Ben.

A perfect morning greeted both Ballincollig and Clonakilty squads for this challenge The first period saw a strong running start from Clonakilty sprint in to a 3 try lead with Ballincollig yet to wake up. This changed in the second period with both teams swapping tries and Ballincollig just coming out on top 3 tries to 2. The final period was evenly matched with 3 tries each in a very entertaining occasion for all. |very well done lads and keep up the good work rate

Ballincollig Under 17s travelled to Fermoy and continued their good run of form with a hard fought victory over the home side. Fermoy showed the greater hunger from the outset and had Ballincollig pinned inside their 22 for the opening 10 minutes. Their backs were the more dominant outfit and during one of their many forays into the Ballincollig danger area James Nyagaya intercepted a pass and ran 50 metres to touch down under the posts which Cameron Lucey converted. Ballincollig were now 7 points ahead against the run of play. This gave them momentum. They won a lineout through Fionnan Mc Dermott on the Fermoy 22. They mauled and then popped to the inrushing Robert Nyhan and he was unstoppable from 10 metres and touchdown for his sides 2nd Try and Cameron Lucey again duly obliged with the conversion. As the half wore on Ballincollig controlled scrums, lineout’s and were particularly astute with the mauling technique which the opposition had no answer for. Ballincollig finished the half with a 14 point advantage but it has to be said that Fermoy contributed to an excellent game and were very unlucky not to have breached the Ballincollig line on at least one occasion. The home side continued their great work rate and were awarded with a try under the posts from a penalty tap. However Ballincollig regrouped and another successful line out yielded a try for Michael O’Shea again after an excellent maul. They were now 19 to and 7 ahead but the home side added another try and with the score 19 to 12 the final few minutes were nip and tuck and the final whistle was greeted with relief by the Ballincollig Boys. All forwards had immense games and the backs defended gallantly. Steffen Bertram got his first taste of Irish rugby on the wing for the final 5 minutes. Cup starts next week with a home game V Dunmanway. Well done again boys.

U/13 v Dunmanway away kick off TBC