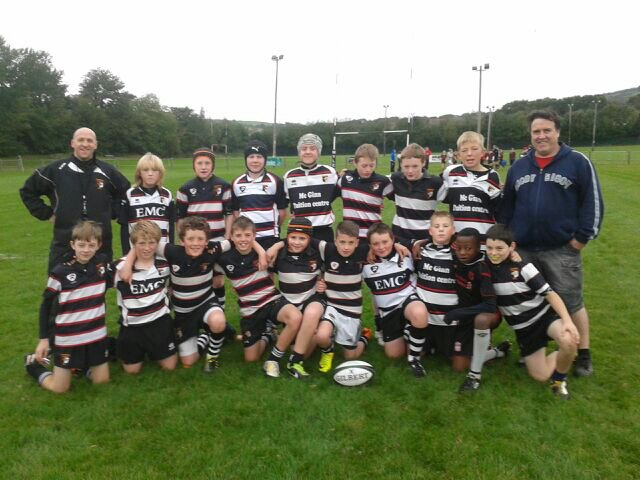 The U10s first match of the season was away against Charleville. The match started well with good tackling by Zack, Eoin O’Brien and David Fahy. It wasn’t long after some good teamwork, that Jamie Dineen scored the first try. Ballincollig maintained very good defence in their own half with Dean Carey, David Hurley, Ben O’Connor, Rory Kiely and Cathal O’Donoghue putting in a great effort in keeping Charleville at bay. They eventually broke through to make the sides level. After a short time Robert Dennehy gained good ground from a penalty. It was collected by Conor Ormonde who went on to score a try. With constant pressure Ballincollig kept Charleville in their own half following great play from Colin, Evan McArdle, Sean and Daniel Keating. Tierlough O’Leary broke through and scored a try. Despite our best efforts, Charleville scored a few more trys, and we lost by two scores. Well done lads

Ballincollig U11s travelled to Charleville for the first game of the season. Both teams were eagerly anticipating the start and when the whistle went, both teams got stuck in right from the off!
A very keenly contested game with both teams competing ferociously in the breakdown, but a quick passing move from Charleville, split the Ballincollig defence open and over they went to take the lead. Half-time 1 try to nil. Ballincollig received the kick off to start the second half, and by using quick hands went on the attack, using the ball sensibly, and going through the phases, Ballincollig mounted sustained pressure on the Charleville line. A series of off-sides gave Ballincollig repeated penalties inside the Charleville defensive zone and some quick thinking from a penalty Ballincollig crashed over the line to level the scores. Both sides made several breaks through each other’s lines, but with outstanding defensive displays from both sides, no one managed to get a winning score.
Full Time: Ballincollig U11 1try – Charleville 11 1 try

The U13s kicked off their season on Saturday with a friendly game against Highfield, who fielded a mixed team of both under 13’s and 14’s, in Tanner Park. This was the Ballincolligs U13s first full game at this level and great teamwork and commitment was given by all. Highfield were 12 points up after the first half but Ballincollig showed get spirit to pull back 2 tries of their own and have only 2 points in it before Highfield, who had a few games already under their belt this season, pulled away with 2 late tries. However the result was trivial in this match, the winner was the free flowing rugby and effort given by both teams in a very entertaining game. Well done to forwards and backs of the Ballincollig under 13’s team who had to come to terms with a full pitch for the first time. Well done lads and keep up the good work.

Ballincollig U16s maintained their unbeaten run when they beat Old Christians 15 points to 12 points last Saturday at Tanner Park. This was a closely contested match with some great forward play and back play by both teams. Ballincolligs tackling and defensive line had much improved from the previous game as did the rucking and the mauling. Ballincollig were superior in the line out in the first half but with old Christians making changes in the second half the line out was more evenly contested. It was great to see the backs and forwards combining and supporting each other when attacking. Both teams scored 2 tries and a conversion each with Ballincollig scoring an additional penalty. This was an overall improved performance from last week apart from the indecisiveness under the high ball which resulted in one of the Old Christians tries. Well done lads.

A perfect start of the League for the 1st XV