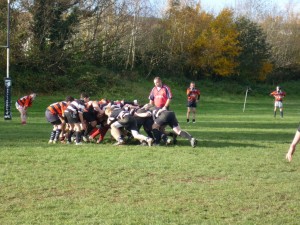 Ballincollig U11s welcomed Midleton RFC U11s to Tanner Park. Again the weather was atrocious with driving rain and a very soft pitch. The game was played at a very fast pace and Midleton seemed to adjust to the conditions better and soon raced into a 3-0 lead. Ballincollig rallied and with some fine individual efforts and really excellent team work managed to level the scores. Ballincollig were now starting to impose their game on Midleton and soon took the lead and just before half time Ballincollig scored again. Half Time Ballincollig 5 tries Midleton 3 tries. As the second half kicked off the rain came down even harder but credit to both teams they dug in and put on an excellent display of rugby which entertained the large crowd which had gathered to watch. Midleton quickly crossed to score and from the restart levelled the scores as the rain lashed both teams handling became difficult and several knock on occurred from both sides and Midleton managed to score again but Ballincollig responded immediately and from the restart Ballincollig took the lead with time running out. Midleton mounted sustained pressure on Ballincollig and eventually crossed to tie the game. Midleton went all out for a win but Ballincollig managed to quickly counter attack to score in the corner. But Midleton never dropped their heads and continued to press and right on the stroke of full time. Full Time Ballincollig 7 tries Midleton 7 tries. Well done to both sides for putting on such a fine display in really bad conditions

Ballincollig U16s were beaten in their first league game by Charleville in Tanner park last Saturday. All the scoring was done in the first half with Charleville scoring 3 tries and 1 conversion to Ballincollig’s 2 penalties. Charleville adopted better to the wet conditions and ran in 3 well taken tries by driving up the middle and spreading the ball wide .In the first half Ballincollig did not use the strong wind to their advantage and tried to spread the ball instead of keeping it tight .In the second half Ballincollig drove and rucked well and were close to scoring on a few occasions but unfortunately could not get over the Charelville line. Ballincollig have plenty to build on before their next league match away to Cobh next Saturday. Good effort lads and best of luck next week!

Ballincollig RFC began their U18 league campaign with a hard fought narrow victory over near neighbours Muskerry at Tanner Park on Sat 26th October 2013. Weather conditions dictated proceedings with a strong wind blowing torrential rain and extremely heavy underfoot conditions. Indeed the match referee was close to calling off the game due to the waterlogged conditions on some parts of the field but the excellent work of Sean O’Flynn ensured the game went ahead as scheduled albeit 15 minutes late. Ballincollig played with the assistance of the wind in the first half made good use of it from the start and constantly pinned back Muskerry and they were awarded a penalty on the 22-metre line which Dave Mc Coy duly kicked. The home side were dominant especially through their forwards who found themselves in attacking positions on a number of occasions but a number of knock-ons resulting from the slippery ball halted their momentum when they had the try line at their mercy on more than one occasion. However they were awarded another penalty for their efforts, which Aaron O’Flynn kicked to put them 6 pts ahead. Muskerry responded within minutes and dispatched a penalty just before half time and were now only trailing by 3 pts. On the resumption Ballincollig worked extremely hard. Fionnán Mc Dermott was unbeatable in the line outs and Robert Nyhan with Peter Kelleher James Kelleher Robert O Donoghue Dylan Desmond and Humphrey O ‘Mahony took ball on time and time again to keep Muskerry on the back foot. The home side were awarded 2 penalties in a matter of minutes inside the Muskerry 22 but instead of kicking the penalty to extend the lead white line fever set in on both occasions but infringements meant they came away with nothing, a lesson learned hopefully. Muskerry pushed their efforts for the final minutes, rucked continuously, and were awarded a penalty in front of the posts but just like Ballincollig a few minutes earlier instead of kicking the penalty to draw the game white line fever set in again and they came away with nothing. Ballincollig defence was excellent and they quelled the Muskerry onslaught repeatedly. Shane Quinlan was particularly effective and a threat at both defence and attack as was Scott Vaughan and James O’Donnell. However Ballincollig were happy with the hard fought win. Well done lads.

U10 – v Midleton away meeting 9.30am travelling by car

U12 – v Midleton away meeting 9.30am travelling by car

U14 – v Highfield League away kick off TBC

U16 – v Cobh League away kick off TBC

U18 – v Dunmanway League away kick off TBC