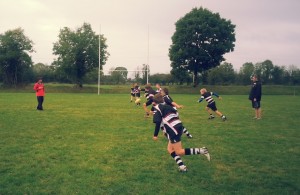 Ballincollig entertained Dunmanway on Saturday morning. Despite the miserable conditions a large crowd of supporters were kept entertained. The try count of 5 tries each was a fair reflection on players that at this age, once “switched on’ are eager to get involved and in time will learn and develop the skills of this fantastic team sport. Well done keep up the good work

Ballincollig faced Dunmanway in their first home game of the new season. They put in a great performance, in a game which saw tries from Jack Murray, Thomas Shanahan, Steven Naughton, Sean O’ Neill, Pete Kelly., Brain Dore and Jake O‘ Kelly. It was a brilliant display of rugby and a well done must go to all of those who played their first game in the Ballincollig jersey. Up next is Kanturk and Midleton who they will play this Saturday at home.

Ballincollig welcomed Dunmanway to Tanner Park for the first home match of the season. Just after kick off the heavens opened and a torrential downpour ensued, but this could not dampen the spirits and enthusiasm of both teams. Ballincollig were quickly out of the blocks and soon crossed for the opening score. With a large improvement in the rucking and counter rucking, Ballincollig were able to create several turn overs and soon crossed again after an excellent passing move. The second half started with Dunmanway on the attack, but with some great defensive work, tackling & rucking, Ballincollig were able to keep the visitors out, and with time running out Ballincollig sprung another attack and with quick hands created the opening to score again.

The U12s got there first win in their second game of the season defeating a full strength Dunmanway team. Ballincollig showed a huge improvement from the previous week with the protection for our tackled player especially impressive. Played in three thirds Ballincollig won the first and third sections and displayed a great hunger for ball possession and support play. All the squad fully committed to the game and we look forward to building on this for the season. Well done lads

Ballincollig U13s played their second match of the season against nearest neighbours Muskerry. Despite at times challenging weather conditions the game was free flowing with plenty of exciting rugby on display by both teams. Ballincollig this time around got the better of their opponents and managed to get 8 tries over the line to Muskerry’s 3. One of Ballincolligs tries in particular deserves a special mention as it involved play by almost everyone in the team and started in Ballincollig’s 22 and involved a number of rucks and superb support play by both backs and forwards. No doubt both teams will look forward to meeting each other again later in the season.

After a last year’s heavy defeat our U-14s knew they were against a very good Kinsale side. Courage, determination and commitment were asked for by the coaches and the whole team responded with a fantastic performance. Jamie Holland replied to an early Kinsale try with one of his own. Kinsale then scored 3 tries without reply leaving the score 20 -5. Ballincollig dug deep and some great forward play was rewarded with a try by Tiernan Quinn and converted by Jamie Holland. Our backline put Kinsale under a lot of pressure and a great try by Sam Kiely converted by Cian Bradley brought us to within a point of KInsale with momentum on our side. It was then Kinsale’s turn to dig deep and we were under a lot of pressure on our own line when Jack Casey broke out and ran the length of the pitch only to be stopped on their line. A last second try by a very good kinsale team secured the points for the hosts.

Ballincollig U16s maintained their unbeaten run when they beat Sundays Well 17 points to 14 points last Saturday at Tanner Park. This was an extremely entertaining match with some great forward play and back play by both teams. After an unconvincing start and being 7 points down Ballincollig improved their ball retention combined with powerful running which resulted in 3 well taken tries. Ballincollig struggled with the lineout at times but in the second half the scrum and 2nd phase play was impressive. It was great to see the backs and forwards combining and supporting each other when attacking. Ballincollig scored 3 great tries and a well taken conversion to 2 tries and 2 conversions. This team is showing great skills combined with team spirit and should be ready for the challenge of the first League match in Tanner park next Saturday against Charleville. Well done lads and best of luck next week

U13 – v Con Constitution away meeting 9.15am sharp (To be driven by parents)

U14 – v Dunmanway League home kick off 11am sharp